A Condensed History of Locksmithing 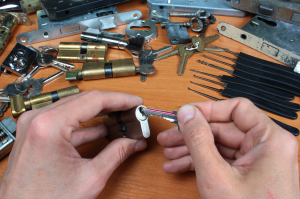 These days, most of us tend to take locksmithing for granted. Locks exist in just about every facet of our lives, and we use them so frequently that we sometimes tend to forget that we’re even doing so.

However, it wasn’t always this way. Long ago, locksmithing was a new phenomenon, one that changed life as we knew it.

Interested in learning a little bit about the history of locksmithing in Wheaton, Illinois and beyond? Read on! This article has you covered.

As far as historians can tell, locksmithing got its start in approximately 2000 BC in the countries of Egypt and Babylon. The locks from this time were crude, to say the least. However, they were fairly effective for the purpose of protecting valuable goods. Made out of wood, they possessed a series of pins that could only be accessed with the use of a large, textured, wooden rod.

These locks developed in popularity, eventually ending up in ancient Rome. There, wealthy individuals would use these locks to protect their homes from thieves.

For over a thousand years, there were no further developments in lock technology. It wasn’t until around 875 AD that lock innovation took place. At this time, metal locks were introduced to the world.

These locks were made out of brass and iron, and were essentially just straightforward bolt locks. Historians believe that they were first made by English locksmiths.

After the development of the first metal locks, they started to pop up all over the world. Small progress was made on the functionality of these locks, but they were still fairly rudimentary.

In the 14th century, something unique happened to locks: they were turned into artistic and social pieces. By this point in time, locksmiths had become skilled in metal work, and were manufacturing locks and keys with detailed and intricate designs. Utilized primarily by the wealthy masses, artistic locks were used to convey a lofty social status.

Until the 18th century, progress on the functionality of locks had stagnated. Locks were artistically beautiful, but functionally lacking.

However, in the 1700s, locksmiths began using sophisticated metal shaping techniques to create locks that were not only aesthetically pleasing, but exceedingly durable, and extremely secure as well.

While lock technology had progressed in the 18th century, it didn’t really take off to new heights until the 19th century. As the industrial revolution swept throughout Europe, locksmiths became more and more adept in the manufacture of durable and secure locks.

In the 20th century, metal locks were perfected. Building off the template of the simple bolt lock, locksmiths started to develop everything from cylinder locks, to door knob locks, to cam locks, to padlocks, and more. Essentially any type of lock you could ever ask for was manufactured during this century.

While manual keyed locks are still used fairly heavily to this day, they are slowly losing ground to electronic locks. Electronic locks come in a variety of forms, including keypad locks, card-swipe locks, electric strike locks, and more.

These locks are popular because they offer a level of accessibility variation that’s never been seen before. Operating without the use of keys, they work terrifically for both commercial and residential security purposes.

Looking for a Locksmith in Wheaton, Illinois?

Are you looking for a locksmith in Wheaton, Illinois? If so, the locksmiths at Suburban Door Check and Lock Service are the people to see.

In business since 1963, we are the premier locksmith service in the Wheaton area. Our locksmiths perform a number of services, including lock installation, lock repair, and lock maintenance.